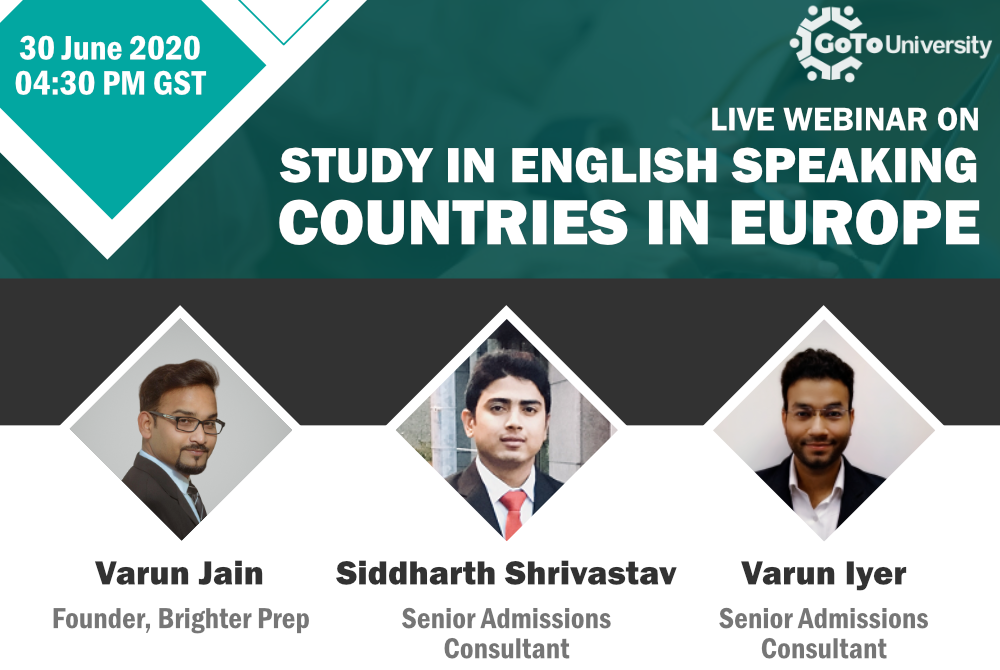 Many students believe that if they want to study in Europe they have to learn a second language but they are unaware of the fact that there are some countries in Europe which are English speaking countries and there is no need to know any second language there. In Europe, Ireland and Netherland are the countries where the majority of the population is English speaking. In this webinar, we will explore why Ireland and the Netherlands are amongst the best countries to study and benefits,

Everyone knows an enormous advantage of studying abroad is the opportunity to find out another language. But what if that’s not really your end goal? What if you’re dying to urge abroad and knowledge another culture, but you actually got to take classes in your major? to not mention tons of subjects have terminology that's pretty specialized, which may make some classes hard to understand albeit you are doing have some knowledge of another language!

Thankfully, English is the common language at tons of universities around the world. many faculties actually need to draw in international students, but it might be difficult for a faculty in, say, Germany to supply plenty of classes conducted in Chinese, Arabic, Spanish, French… you get the thought. With English because of the commonest second language within the world, it just is sensible to supply courses in it.

Study in Ireland in English

When we talk about Ireland the first thing that comes to our mind is a technology hub and home for some top multinational companies and that’s why Dublin is called “Silicon Valley of Europe”. Ireland is considered one of the most loved destinations by international students due to its quality of education which is recognized worldwide the same as the United Kingdom equivalents on both undergraduate and postgraduate levels. Ireland is home for some top universities around the world, some of them are University College Dublin, Trinity College Dublin, Dublin City University, University College Cork, NUI Galway, NUI Maynooth, Limerick University & Technological University Dublin. Some of the best courses to study in Ireland are Engineering, Information Technology, Medicine, Pharmaceuticals, Business Management, and many more.

Ireland is a popular destination for international students offering quality education that is recognized throughout the world. Not just the education which is fantastic, the country has beautiful historical cities, natural scenery, and unique heritage. Ireland is located on the west coast of Europe and is a member of the European Union.  Irish qualifications are the same as the UK equivalents, so whether a student opts for an undergraduate or postgraduate program it will have an equivalent value that can give any professional career a hit start.

Study in the Netherlands in English

Study in Germany in English.

Germany is one among Europe’s educational forces to be reckoned with. With its high rate of international students and great universities, Germany is usually on the list of great destinations for undergraduate studies. Because we’re so nice and helpful, and that we want to ascertain you studying in Germany and eating schnitzels, we will recommend a number of the foremost popular universities there, like:

Study in Greece in English.

Study in the Netherlands in English.

Top Universities in Europe that Teach in English.

Top Universities in Poland that Teach in English.

Top Universities in Spain that Teach in English.

Attend our webinar to know more about study options in Europe