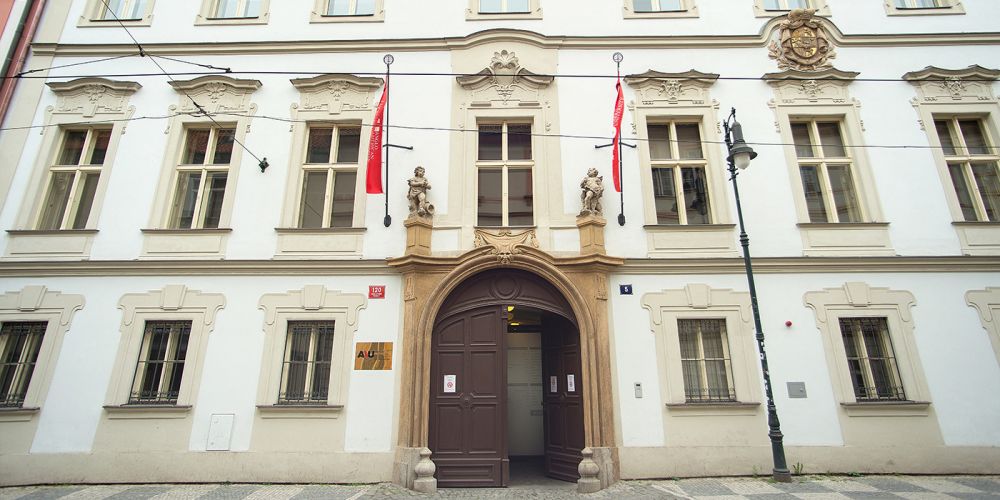 Anglo-American University (AAU) is a private English-language university in Prague, Czech Republic. It was the country's first private university to offer English as the medium of education when it opened in 1990.

Anglo-American University was established in 1990 as the Anglo-American College. The AAU was founded by Jansen Raichl and Vlasta Raichlová, shortly after the collapse of communism. The goal was to establish AAU as a higher education institution that would integrate Central European university traditions with academic ideals from the United States and the United Kingdom. The English name of the college was then changed to university rather than college.

In 2010, AAU became the first university outside of the United States to be invited to seek for Western Association of Schools and Colleges institutional accreditation (WASC). This accreditation was granted in 2016, making AAU Europe's first WASC-accredited university.

The main campus of AAU is situated in the newly renovated Thurn-Taxis Palace, a cultural landmark dating from the 17th century that was once owned by the German Thurn und Taxis noble family but is currently controlled by the city of Prague. There are 16 classrooms, a computer lab, and a visual arts studio on the campus, as well as a restaurant, playground, and student lounges.

AAU has a university library with 19,000 books, the majority of which are in English. Students, professors, and staff at AAU have access to the holdings of the Institute of International Relations Prague, the Institute for Contemporary History, the Academy of Sciences, and other Prague libraries. Music and spoken word events, readings, and discussion groups are also held at the library.

AAU offers housing services to its students through collaboration with Zeitraum Student Housing, which is their exclusive provider. Zeitraum offers housing for AAU students and other young professionals in Prague. It is located at U Prhonu 56 in Prague 7, in a newly renovated building. The residence is about a 25-minute bus ride from the AAU campus and has amenities designed for comfortable student life. Furniture (bed with mattress, pillow, and duvet, set of bed linens, desk, chair, and wardrobe with the following measurements) is included in AAU's housing services.  The wardrobe is 200x120x60 inches and includes a chest of drawers.

A security guard and a receptionist are on duty 24 hours a day at the building.

For more information about housing services you can visit here-

Students at AAU have access to primary treatment. Students can get all of their medical needs met at the university's health centre. Non-EU citizens applying for a visa (or a residence permit) to study in the Czech Republic must have proper health insurance, according to Czech legislation. Holders of the European Health Insurance Card (EHIC) must register their EHIC with a Czech health insurance company if they intend to stay in the Czech Republic.

One of the best ways to get the most out of your time at AAU is to join a club or organization. There are several clubs to choose from, extending from Drama, Sport, and Art to Politics. AAU has over 100 student clubs and organizations to provide you with a variety of opportunities to find your hidden potential. Aside from that, you can form your own student club based on your passion.

The following are the names of some of the student clubs-

Anglo-American University (AAU) is the country's first private English-speaking university. AAU has only one campus, which is located in Prague, the Czech Republic's capital. The Czech Republic, commonly known as Czechia, is a landlocked country in Central Europe that has a developed economy and high living standards.

Václav Havel Airport is located in Prague, Czech Republic. The international airport of Prague, originally known as Prague Ruzyn International Airport, is the closest airport to the AAU.

In collaboration with Kent State University, the AAU offers multiple bachelor's degree programs, including Computer Science (B.A. or B.S.), B.B.A. Computer Information Systems, and B.S. Emerging Media and Technology with a minor in User Experience or Web Development. Aside from that, the Anglo-American university also uses University of London International Programs Courses to operate master's programs in Humanities, International Relations and Diplomacy, and Master of Law (LLM) programs in International Intellectual Property Law and Law and Development.

AAU also offers a variety of Czech culture courses, including:

In collaboration with Chapman University in California, the Anglo American University also offers a Master of Business Administration (MBA).

AAU's student services and support team is ready to assist new students in all aspects, including financial, medical, admission, and visa and immigration. The Bursar at AAU is available to address any inquiries you may have about tuition or other financial matters. The AAU Incoming Student Mentor Program pairs new students with a group of veteran student volunteers who help them adjust to university life. AAU Mentors can assist you whether you are a first-year student, a transfer student, or an exchange student.

For more information you can visit here-

Students from the EU or EFTA countries do not need a visa to study in the Czech Republic. To study in the Czech Republic, students from non-EU or EFTA countries must get a visa or a residence permit. Visas and residence permits are issued by Czech embassies in your place of origin (and/or residence) and must be secured before to visiting Prague. Within 60 days of submitting your visa application at the appropriate Czech Embassy, you should receive a decision on the outcome. All applicants should contact their nearest Czech consulate as soon as possible, according to Anglo American University.

For more information you can visit here-

A number of student societies are run by the Anglo American University. These student groups are usually focused on culture, academia, or athletics. It helps students to contribute to the community by being resourceful. The Anglo American Independent Literature Research Society is a well-known student society at AAU.

The AAU recognizes the importance of sports and fitness. Despite the fact that AAU does not have a gym or recreational centre, they have partnered with centrally situated fitness providers in Prague to provide students with affordable access to top-tier facilities and fitness resources. Students clubs at AAU also conduct sporting events or fitness activities from time to time in order to keep AAU students fit and healthy.

Considering mental and physical health are important factors in academic and personal success, AAU makes steps to link you with resources and activities that will help you maintain your health and well-being while at Anglo American University. Throughout the year, with the exception of August, all AAU students, professors, and staff are eligible for free psychological treatment. Counselors Su Luo and Petra Narwa deliver it in English.

Through a partnership with Zeitraum Student Housing, AAU provides residential facilities to its students. This residence service provides every amenities and equipment for a comfortable student residential experience. The complex consists seven floors and 111 rooms, with the option of double or single rooms. Accommodation is available for the entire academic year, as well as the complete fall (September -December) or spring (February- June) semesters. Students can also be accepted throughout the winter (January) and summer (June/July/August) periods if space is available. The cost of living in AAU's Residence is CZK (Czech Koruna) 87,000 for single occupancy and CZK 77,000 for double occupancy. A refundable deposit of 12,000 CZK is included in the pricing. Utilities, Wi-Fi, government fees, and usage of communal areas are all included in the price. The security deposit will be reimbursed at the conclusion of the semester or year, less any penalties for damages or fines.

Students studying at AAU can find a variety of food and drinks alternatives both on and off campus.

Prague is routinely ranked as one of Europe's top ten most affordable cities, as well as one of the world's top ten finest student cities. It is a safe, multinational city with great public transit, a significant expat community, and a wide range of job options for students and professionals.

AAU offers part-time jobs to students so that they can gain financial independence and work experience while in university. Students at Anglo-American University in Prague who are enrolled full-time and have valid student status are permitted to work while studying. Students can work part-time as a library study assistant, an ATC tutor, an operations study assistant, a receptionist, or a marketing/social media assistant at Cafe Des Taxis Barista.

Crime Around the area

Prague is a relatively safe city, except from property crime. The prevalence of violent crime in Prague is minimal, and it is safe to go around even after dark in most neighborhoods. On Wenceslas Square, be cautious. It is generally crowded with tourists, making it easy for pickpockets to operate.

Anglo-American University offers a diverse range of undergraduate/postgraduate programs in collaboration with foreign partners and across five schools.

For brochures & applications you can visit here-

Shortlisting of Colleges and Universities in Czech Republic