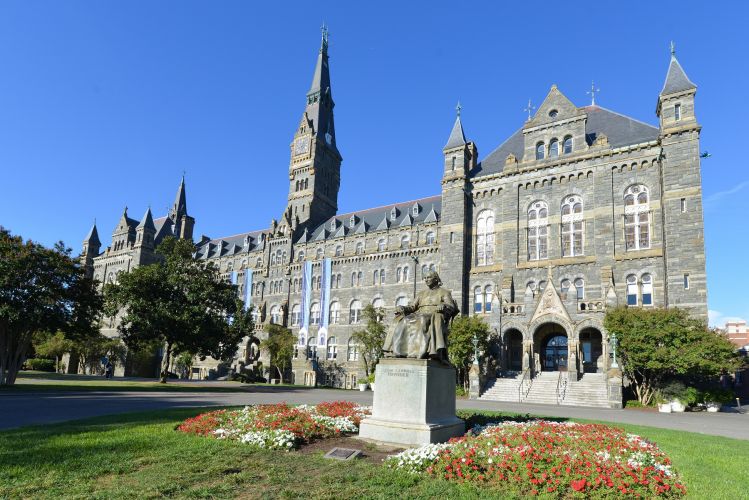 Study in United States of America with Georgetown University

Georgetown University is a private research university in Georgetown near Washington D.C. The University is ranked among the top universities in the United States and it is highly selective in its admissions. It comprises ten undergraduate and graduate schools.

Georgetown University was established in 1789 as Georgetown College by Bishop John Carroll. In 1789, Carroll secured the deed of 60 acres of land on a hilltop. Classes in The University started in 1792.

The Georgetown University comprises of following ten schools and colleges –

Student can find course of their choice on the official website of the Georgetown University that is https://www.georgetown.edu/acdemics/area-of-study/

The Georgetown campus has four campuses that are –

Georgetown’s undergraduate campus and medical school campus collectively called the main campus of the university. It is situated on an elevated site of river Potomac that is why it is also referred as ‘The Hilltop’. The main gates are known as ‘Healy Gates’. It is a 104 acre campus but includes 54 buildings which consist of academics, residences and apartments which are capable of accommodating 80% of undergraduate students. Most buildings are of collegiate Gothic architecture. Hearly Hall of the campus is a National Historic Landmark.

This campus consists of five buildings. First year law students can live in the single on campus dormitory and most second and third year students live off campus as there is little housing near the Law Center.

This is the campus of School of Continuing Studies and it is located in Washington D.C. It is home to graduate programs in fields such as Intelligence, Journalism, Public Relations, Real Estates and Sports Industry Management. It has an auditorium, a digital lab, a broadcast studio, an interfaith chapel and a dedicated library.

The School of Foreign services has its campus in Al Rayyan, Qatar which was opened in 2005 as a liberal art and international affairs undergraduate school for regional students. It is supported by Qatar foundation and Georgetown University.

Georgetown University has a huge system of libraries through which it helps the students. Some of the libraries are –

The notable alumni of Georgetown University are –

Students host many events on campus to celebrate Georgetown traditions, culture, alumni, sports and politics. In April, the University celebrates Georgetown Day in which they reward the best professor of the year with the Dorothy Brown Award according to the votes of the student. Halloween is celebrated with viewings of alumnus William Peter Blatty’s film The Exorcist. Homecoming coincides with a home football game and a formal dance which are sponsored by the Alumni Association.

The George University has a Club Sports Board which supports club teams. The largest sports celebration is the first basketball practice of the season that is called Dubbed Midnight Madness; this event introduces the men’s and women’s basketball teams. U.S News & World Report ranked Georgetown's athletics program among the top 20 in the nation. The school’s teams are called ‘Hoyas’. The University also hosts games like Baseball, basketball, sailing, tennis etc.

Further entry requirements for Georgetown University are based on the courses. Students can check their eligibility on the official website of the university that is https://www.georgetown.edu .

The Acceptance rate of Georgetown University is 17%

Georgetown University provides financial aid to each and every student. The Aid is irrespective of the ability of the students to pay or academic score or whether the student can cover the cost or not.

Students can directly apply on the official website of the Georgetown University that is https://www.georgetown.edu

Georgetown University charges the students according to their desired courses; it ranges from USD 36,000 to USD 60,000.

Masters: Fees vary for each program.