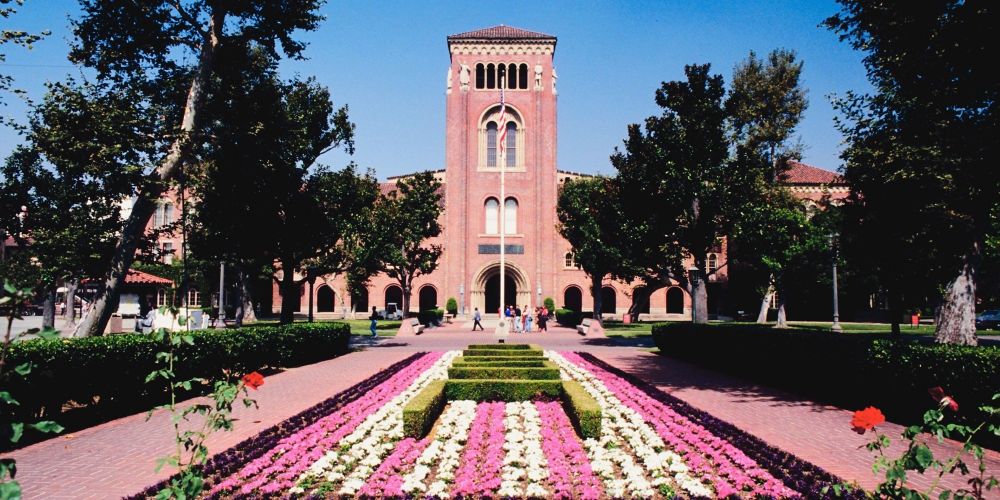 Study in United States of America with University of Southern California

The University of South California (USC) is a research based private university in Los Angeles, California. It was founded in 1880 by Robert M. Widney which makes it the oldest university of California. It is among the top universities in the United States. Its admissions are highly selective. The motto of the university is ‘Palmam qui meruit ferat’ which means ‘Let whoever earns the palm bear it’.

The University of South California was founded in 1880 by Robert M. Widney, who secured donations from the key figures of Los Angeles. Originally the university got its affiliation from the church and the school mandated that ‘no student is denied admission on behalf of his race’. The university is no longer in affiliation with the church. During the World War, the university was one of the few universities that took part in V-12 Navy College Training Program, which offered students a path to Navy commission.

The University of South California is frequently among the top universities of the United States. It is a pioneer institute in research, innovation and discovery. It is well known for its Annenberg School for Communication and Journalism and School of Cinematic Arts. It is famed for its prestigious creative programs, particularly film.

The campus of the University of South California is located in the University Park district of Los Angeles. The campus lies between Jefferson Boulevard on the north and northeast, Figueroa Street on the southeast, Exposition Boulevard on the south and Vermont Avenue on the west. It has walking distance from the Los Angeles Landmarks like Shrine Auditorium and Los Angeles Memorial Coliseum. The buildings of the university are of Romanesque style and the dormitories and labs are of modernist styles. Widney Alumni house is the oldest building of the university which was built in 1880. The historic part of the main campus was listed on the National Register of Historic Places in 2015. University also has the Health Sciences Campus to the northeast of downtown. The university also operates an Orange County center in Irvine for business, pharmacy, education and social work. The Information Sciences Institute has its centers in Arlington, Virginia and Marina del Rey.

The University of South California library system is among the oldest academic research libraries in California. The library of the university has a huge collection of American literature, Cinema- Television, studio archives, European philosophy, gerontology, German exile literature, international relations, Korean studies and Natural history. The University’s Warner Bros. Archives is the largest single studio collection in the world. The testimony of 52,000 survivors, rescuers and other who are involved in The Holocaust is housed in the University Of South California College Of Letters, Arts & Sciences.  The digital library of the university has collections of the highlights which include California Historical Society, Korean American Archives and Automobile Club of South California. In 2010, the collections at ONE National Gay and Lesbian Archives which is the largest documents from the lesbian, gay and transgender community in the world, became a part of USC library.

The notable alumni of the University of South California are –

The primary source of news and information for the campus is the newspaper named Daily Trojan which was started in 1912. It receives its financial aid entirely from the advertisement revenue. The student run college radio station is called KXSC which is entirely managed by an unpaid staff of nearly 200 student volunteers. It gives a variety of experience to the students in music, live event promotion, social media management and audio engineering. The university’s student television station is called Trojan Vision which is also called TV8. TV8 was established in 1997 and now it is a part of the School of Cinematic Arts. El Rodeo is a student run yearbook. It is one of the oldest student traditions of the University, the first edition was released in 1889.

The teams of University of South California are known as Trojans. They participate in the NCAA Division l Football Bowl Subdivision. It has won 123 total team national championships. The men’s 361 individual championships are the second-best in the nation. In the Olympics they have won 144 gold medals, 95 silver and 72 bronze. If the University were an independent country, it would be ranked 13th in the world in 2016 in terms of medals. The University also provides facilities for tennis, volleyball, water polo, golf, basketball, beach volleyball, swimming and diving.

The average cost of undergraduate courses in The University of South California is 60,000USD.

The University uses available funds from federal, state and university sources to meet student’s financial needs. The eligibility is based on two factors: the cost of attendance and expected family contribution. The student’s ability to pay is not a criterion for getting financial aid.

Students can directly apply on the official website of the University that is https://www.usc.edu