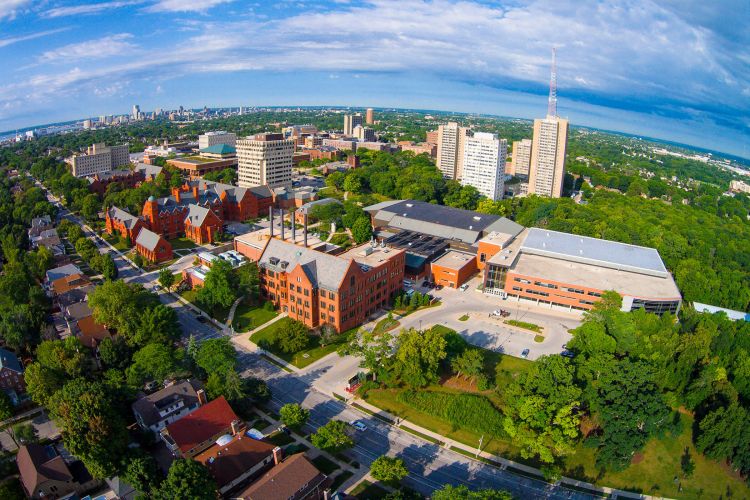 The University of Wisconsin Milwaukee offers 195-degree programs including 94 bachelor’s, 64 master’s, and 33 doctoral degrees, with classes taught by faculty members recognized worldwide as experts in their fields. It’s also home to Wisconsin’s largest online education program, with more than 850 classes and 40 fully online certificate and degree programs. The university is home to the state’s largest collaboration of health sciences, nursing, and public health programs through its Partners for Health initiative. It also boasts one of the world’s top film programs, the state’s largest school of education and Wisconsin’s only program in American Sign Language. The University consists of 14 colleges and schools and 70 academic centers.

The University of Wisconsin Milwaukee is located in a residential area of Milwaukee’s Upper East Side. The Campus is divided into central, north, west and northern quads. In the central quad, the library section is into 3 parts i.e The West Wing, East Wing and conference center of the top. In Northern quads, the campus contains conservation center and the school’s indoor sports facilities are involved in this campus. In West Quad, the campus involves College of Engineering and Applied Science, The college of nursing, and many more colleges are included in this campus. The Northwest Quad campus include parking structure and currently, the building schools of The School of Information Studies and numerous departments offices are there in this campus.

The University of Wisconsin Milwaukee, the university was awarded for architecture and urban planning building on the east side of West Quad in the year 1993. The university's athletic teams are called the Panthers. A total of fifteen Panther athletic groups contend in NCAA Division I. Panthers have won the James J. McCafferty Trophy because of the Horizon League's all-sports champion seven times since 2000. They have attained 133 Horizon League titles and created forty NCAA tournament appearances as of 2016.

The UWM Research Foundation supports and commercializes the university's research and innovations. It provides intellectual property management, technology transfer, corporate-sponsored research, and strategic corporate partnership services to UWM researchers and industrial corporations. Research Growth Initiative (RGI) is a program designed to expand UWM's research enterprise through investment in projects with an anticipated return on investment through extramural funding. The application process is competitive and rigorous. Proposals are evaluated by external reviewers with national reputations and ranked according to their quality, rewards, and risk.

The University of Wisconsin Milwaukee was ranked among the top 100 universities in the U.S. by Vanguard College Ranking, 167th by Washington Monthly and one of the best Midwest colleges by Princeton Review. The University ranks 179th within the North American country by research expenditure in 2009. The part-time MBA program at the Sheldon B. Lubar Faculty of Business has been ranked 18 (in the Midwest) and 75 (nationally) by Bloomberg Business week 2011-2012 ranking survey.