Book a Free Session with Our Consultant

Founded in 1976 with the goal of drawing the best talent and practices from around the world, St. George’s University in Grenada has become a leading center for academic excellence worldwide. With students and faculty drawn from more than 150 countries, they truly are an international institution, perfectly poised to help educate students in this rapidly changing world. SGU has over 19,000 School of Medicine graduates in the US and around the world who are part of a strong alumni network. As of July 2021, no other medical school in the world provides more new doctors to the US healthcare system.

If you’re envisioning a tropical paradise, you’re pretty much spot on. Expect year-round highs around 85 degrees Fahrenheit. May through November is considered the rainy season, with average precipitation ranging between seven and eight inches per month.

The list of things to do in Grenada is nearly endless. There are distillery and chocolate tours, hiking trails through the rainforests, and a slew of water activities. About 25 or 30 percent of SGU students get their dive certificates while they're down in Grenada. In addition to exploring the sea life, divers can also check out the fantastic underwater sculpture park.

And remember that all students are surrounded by classmates who are all in the same boat. Dr. Ish Saxena, an SGU Graduate says “The best thing about it all was the sense of community. I made lifelong friendships and professional connections, and it’s been great to stay in touch and see how successful my fellow graduates have been”.

The five-, six- and seven-year preclinical programs include coursework designed to prepare students for medical school during preclinical sciences.

In the four-year MD program, the Basic Medical Sciences concentrate on the traditional basic science disciplines. Laboratory experience is an integral part of these two years, along with small group discussions designed for problem-based learning and early integration of the clinical medicine into basic sciences. 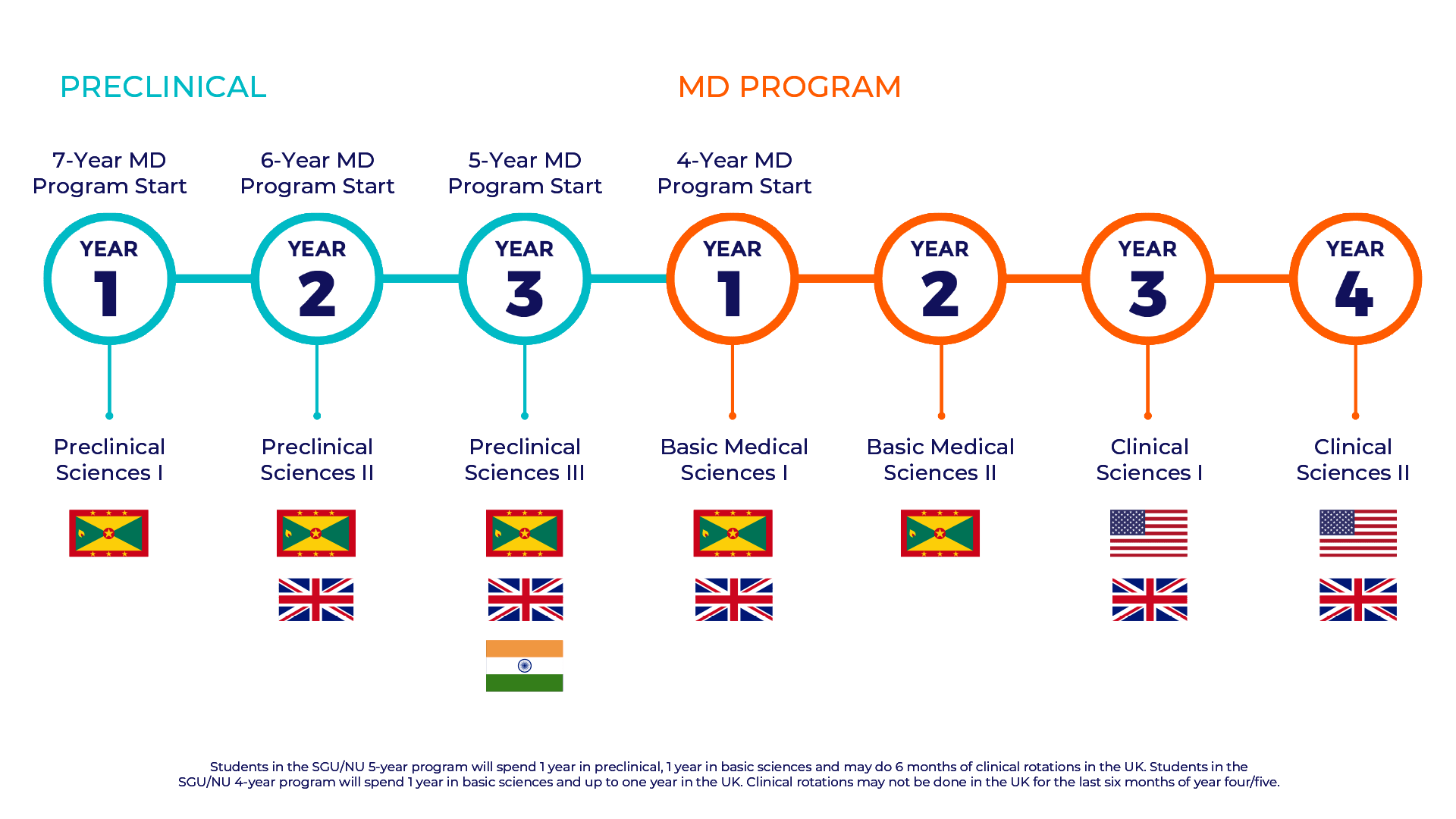 The final two years focus on clinical sciences, with training at SGU’s over 70 clinical centers and affiliated hospitals in the United States or United Kingdom. Clinical training emphasizes responsibility, maturity, and compassion in the development of professional excellence. Students learn how to conduct themselves as physicians, take responsibility, work harmoniously with professional colleagues, and exhibit maturity.

An MD program at SGU provides ambitious students with the chance to study and work in multiple countries as part of their training in order to experience a multitude of healthcare systems and practice medicine across all specialties with a global perspective.

In addition to the University’s True Blue campus in Grenada, SGU’s students can complete up to 50% of their degree in the United Kingdom at Northumbria University in Newcastle upon Tyne. Similarly, in a partnership with Ramaiah Group of Institutions, students on a 5-year medical pathway can complete their first year of study in Bengaluru, India. The three paths feature the same curriculum and provide a strong foundation for SGU’s future physicians. For the last 2 years, SGU students take up core rotations and sub-internships in specialties such as surgery, pediatrics and psychiatry at one of over 70 affiliated hospitals and health systems in the US and UK.

In addition to this, SGU has nearly as many international students as all US medical schools combined* meaning students at SGU are surrounded and supported by like-minded individuals who have chosen to broaden their horizons with an international medical education.

1. Degree: A bachelor’s degree with a strong science background is necessary.

2. English language: If English is not the principal language of the applicant’s country, the applicant must submit acceptable scores on one of the following English Language Assessments.

Our experienced consultants will guide you throughout your journey in pursuit of higher education and admissions into your dream universities/colleges. In specific but not limited to, following areas of assistance is provided by our consultants:

The UK (England, Scotland, Northern Island and Wales) offers an extended history of teaching some of the world’s greatest personalities. England has been the most dominant among the four countries in the UK, with about 80% of the total population share.
4906
Read More

Australia is the 6th largest country in the world and is also the smallest continent. It is about 7.7 million square kilometers in size, with a population of approximately 25 million.
4642
Read More

Study in Canada For International Student

Canada is situated in the continent of North America and is the second largest country by size in the world, after Russia. It is a modern and progressive nation consisting of a multicultural society, and natural beauty is something to look forward to when
23026
Read More

Germany is one of largest country in Europe comprises of sixteen states and having one third of forests and woodlands. The capital city of Germany is Berlin and it is second most popular city in European Union.
87402
Read More