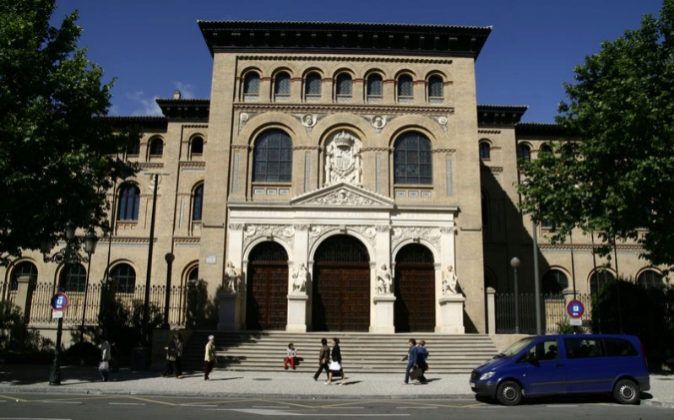 Study in Spain with University of Zaragoza

The University of Zaragoza is a public university located in Zaragoza, in the Aragon region of Spain. It was established in the year 1542, it is one of the oldest university in Spain, with a history dating back to the Roman Period.

University of ZaragozaPrograms, Courses, and Schools

The University of Zaragoza campuses are located in the Community of Aragon in Spain. The community is formed of 3 provinces: Zaragoza, Huesca, and Teruel.

The Zaragoza campus is divided into five different locations throughout the city. Campus Plaza urban center is that the largest of the 5 locations and is home to a majority of the university schools and departments in Zaragoza. The other four locations, Campus Rio Ebro, EscuelaUniversitaria de Turismo, Plaza de Basilio, and Facultad de Veterinaria host only one to two colleges each.

The Huesca location has a number of colleges including the Polytechnic School, Faculty of Health and Sport Science, Faculty of Humanities and Education, and Faculty of Business and Public Management. Also, the affiliated School of Nursing of San Jorge hospital is located in Huesca.

The Teruel campus is home to the technical school wherever you find computer engineering and similar programs. It is also the location of the Faculty of Social and Human Sciences and the affiliated School of Nursing of the Obispo Polanco hospital.

University of Zaragoza, Santiago Ramon y Cajal was awarded the Nobel Prize in Physiology in 1906 and it is widely recognized is the father of modern neuroscience. In 2011, the university had an estimated 3,803 researchers and 8,305 partnering companies.

The University of Zaragoza, in 2014 and 2015 university was ranked for Spanish Master Programs. In 2013 the university came 9 in top universities in Spain.  The University also provides Scholarship to the students who deserve.

College Profile for  University of Zaragoza

Recommendation letters for University of Zaragoza

A strong proficiency in the English language is essential for admission into universities in Spain. To be able to get a successful admission in University of Zaragoza in Spain students need to complete IELTS with a minimum score of 6.5.