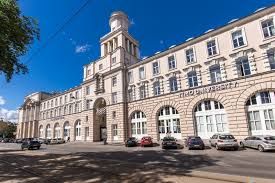 Study in Russia with ITMO University

ITMO University is the largest state university situated in Saint Petersburg, Russia. The university was founded in the year 1900 with Fine Mechanics and Optics as the only two sections and now the university consists of 18 departments, 7 research institutes and more than 2000 students with more than 900 foreign students enrolling every year.

ITMO University offers short- term programs for students to add up some extra knowledge in terms of education, research and career opportunities. The university also offers a double degree Master’s program or a Ph.D. at the same time in on-campus and distance education modes. There are 13 international research centers consisting of 29 international research labs which are known for its research efforts, resources, and successful results.

ITMO University has a huge campus wherein there are many residences available for students. There is a place known as the student’s town where accommodation is available at a distance very close to the university. Students are provided with all necessary facilities within and outside the campus area. Along with a wide campus and a comfortable place to live ITMO also offers health care, emergency, and sports service for students and staff.

ITMO University has a sports centre in Vyazemski Pereulok where students and staff are offered with many options in sports and other activities such as a full-size basketball court, a gym with a variety of workout equipment and a climbing wall. The university has its own Students Sports Club called Kronbars which consists of 20 sports items including cheerleading. They also offer individual sports like yoga and swimming. The university also organizes volunteering events with local organizations for charities.

ITMO University has not only made a benchmark in the top universities but also has been achieving great success in the field of Research and Technology by holding 1st place in the Google Hash Code 2018. The university professor has also been awarded L’Oréal-UNESCO fellowship by UNESCO in the year 2018 for her outstanding contribution in the field of Science and Technology.

ITMO University has a high acceptance rate and the tuition fee is comparatively affordable as compared to others. There are more than 1800 scientific articles written by the faculties of the university which are published every year.

ITMO University has launched ITMO.EXPERT a digital program for professors and instructors wherein they can be updated with new skills in digital technology, teamwork, and game technology through peer learning.

A strong proficiency in the English language is essential for admission into universities in Russia. To be able to get a successful admission in ITMO University in Russia students need to complete IELTS with a minimum score of 6.5.