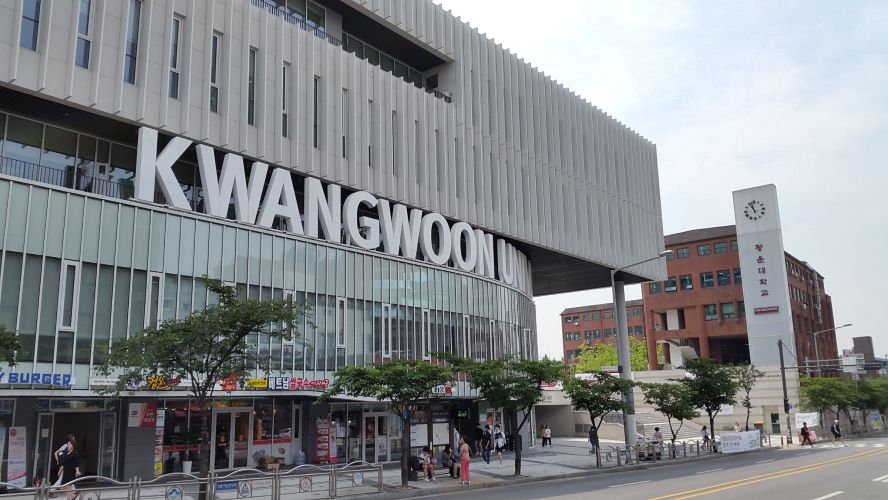 Kwangwoon University is a private, research university based in Seoul, South Korea. It was founded in the year 1934 by Hwado Kwangwoon Cho as Chosun Radio Training Center later renamed as Chosun Institute of Radio Engineering in 1940. The college was renamed again in 1964 to Kwangwoon Institute of Technology eventually being granted university status in 1987. The university currently caters to 8213 undergraduate and 1292 graduate students and is renowned for its reputation in engineering and IT domains.

Kwangwoon University comprises of 8 colleges and 29 departments for undergraduate studies and 6 specialized graduate schools for postgraduate and doctoral students. The university is renowned for its engineering programs such as Electronic and Communications Engineering, Software and Computer Engineering, Architectural Engineering, Chemical Engineering, and Environmental Engineering. The university also offers courses in Business, International Trade, Mathematics, Chemistry, Sports and Leisure, Korean Language and Literature, Law, and Industrial Psychology.

Kwangwoon University is also home to over 50 institutes and centers of research catering to the academic community worldwide. Some of the research centers are cross-national, partnering with institutes of high academic repute from other countries.

Kwangwoon University is located in Nowon-Gu, a short drive from downtown Seoul. The university campus houses the buildings for faculties and departments and a central library.  80th Anniversary Building worth 34 million USD was officially opened in the year 2014 during the university’s 80th Anniversary.  The Donghae Culture and Art Center on campus provides seating spaces in two state-of-the-art theatres for 2100 and 400 people respectively.

Kwangwoon University is one of the reputed institutions for research. The number of papers published in international journals by Kwangwoon professors ranked 2nd amongst Korean universities for three consecutive years. Kwangwoon graduates are also ranked as one of the most employable graduates in Korea.

Kwangwoon University students are now working as CEOs, Presidents, and Vice-Presidents of renowned Korean and multinational companies. The university has also performed exceptionally well at international sports and academic events.

Kwangwoon University is one of the few universities in the world to offer company-supported programs in partnership with multinationals like Samsung and LG Electronics. Career development programs allow the students to mingle with CEOs of corporations like LG and Samsung and attend special lectures by famous politicians, scholars, and heads of corporations.

Kwangwoon University also has student exchange programs with over 125+ universities and educational consortiums. Moreover, the university has an English Certification system to enhance the language proficiency of its students.